Activities with water are especially good for summer, and this classic Montessori sink and float activity is one that works well indoors or outdoors. It’s also a great activity to use as part of a foreign language study.

Michael Olaf gives directions for the earliest experiential introduction of the activity without even using labels or the language sinks and floats. Note: Most Montessori preschools put out the labels and give the language right away, so feel free to individualize the activity for your child.

Jessie has a post at Mommy Moment with directions for using sink and float indoors or outdoors. There’s also the helpful idea of using waterproof labels.

Leptir (the photo at the top of the post) has a free float/sink printable in Croatian, English, Spanish, or French. Leptir has extensions of having the children make their own notes: either drawing the objects or writing the names of the objects in the sink/float columns.

Float and Sink (Photo from Olives and Pickles)

Olives and Pickles has a Spanish version of the activity with a free Spanish printable that can be laminated for using as a mat for the objects. Or it can be printed out and used for drawing the objects or writing the names of the objects.

The Moveable Alphabet gives directions for preparing and introducing the activities. The post tells of the problems that can come from misuse of the activity.

Float and Sink (Photo from The Moveable Alphabet)

The Moveable Alphabet also lists some extensions of water activities:

“1) Filling a lidded jar with water so as to roll it across a printed page as one uses a magnifying glass. 2) Cutting a nickel sized hole in a small piece of paper, placing a strip of tape completely over the cut out hole and placing the taped hole over an object that could be magnified like a leaf or newsprint. Then, using an eyedropper – drop a large droplet of water on to the tape covered hole and seeing through the droplet a magnified image of the leaf or print.”

Read the post to learn about a fascinating extension developed by the children themselves: building boats and testing different materials to use as anchors.

Moteaco’s 3-6 Culture Album (which used to be online) has sink and float extensions using plasticine to manipulate shape and comparing buoyancy of salt water and fresh water.

The Google version of David Gettman’s Basic Montessori: learning activities for under-fives has additional ideas for making clay boats and fountains and using a waterwheel.

The Wonder Years has an extension using a leaf and adding one pebble at a time until it sinks. 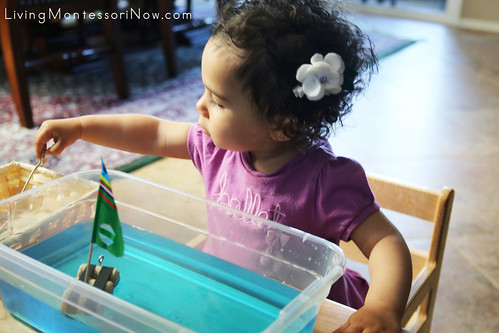 Working with a Sink and Float Activity

I have a post with sink and float activities to coordinate with Land, Water, Air activities.