I have some fun math manipulatives for you today! I’m sharing the link to a free printable I’ve used to create a Montessori-inspired greater than less than alligator math activity for preschoolers through first graders.

I have some fun math manipulatives for you today! I’m sharing the link to a free printable I’ve used to create a Montessori-inspired greater than less than alligator math activity for preschoolers through first graders.

This activity can be a fun way to refresh knowledge before the beginning of the school year, and it works well any time during the school year, too. You can also use it as a way to check and reinforce your child’s understanding of numbers before kindergarten. It fits in well with the math activities in this post: Montessori-Inspired Kindergarten Readiness Activities.

Disclosure: This post has affiliate links at no cost to you.

Greater Than Less Than Alligator Math

My own children enjoyed using the alligator concept to learn about greater than and less than. If you use hands-on materials, it can easily be used with preschoolers. I taught my kids that the alligator is greedy and always wants to eat the bigger number. His mouth opens toward the bigger number. When the numbers are the same, he can’t decide which one to eat and closes his mouth, which makes the equals sign. 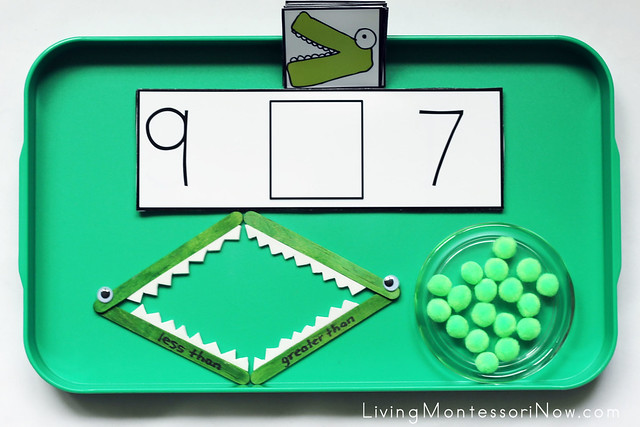 While the “greater than” and “less than” alligator has been around for a long time, you can use Montessori ideas to create an activity your child or students can use when they choose.  You could either have the activity set up at a table, or place the tray on a shelf where it’s easily accessible.
To put together the activity, I used the free alligator work station (which is very cute!) from The Littlest Scholars. I just used set 1 with the number 0-10. For more advanced students, you can use set 2 with the numbers 11-20. The Littlest Scholars also has a free “I Can Chart.” If you want your students to write their answers in addition to doing the hands-on activity, there’s a downloadable student recording sheet.

I made a craft-stick alligator based on the activity at One Extra Degree. I glued on craft foam for the teeth (although I’m sure you can do a much better job than my craft-challenged self!) and a craft googly eye for each alligator.

I used a glass candle coaster for 18 pom poms (the largest number needed to work out the problems in set 1). You could add a sugar tong to transfer the pom poms if you’d like to add a practical life activity to the math tray. This activity also uses a large plastic tray and large hemmed work rug from Montessori Services.

Montessori-Inspired Greater Than Less Than Activity 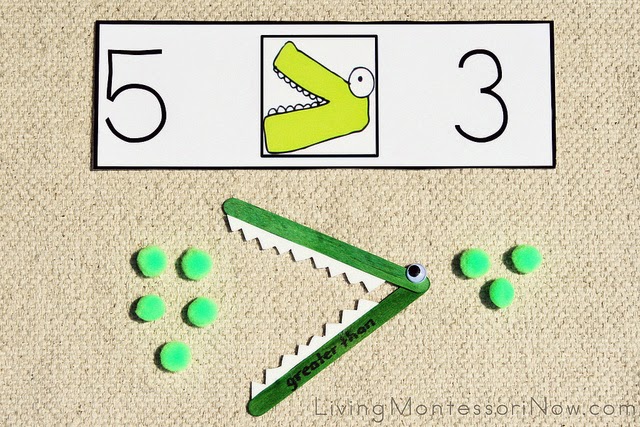 When showing how to do the layout with the craft-stick alligator, I recommend placing the pom poms in rows of two with a leftover pom pom centered below the last row. It’s a standard Montessori layout for cards and counters and gives a visual representation of odd and even. It also makes the larger number more obvious than a random placement of pom poms would.
After placing the pom poms, craft-stick alligator, and symbol card in the layout, I would read the equation while pointing to each part of the equation. In this example, I’d say, “5 is greater than 3.” You could just demonstrate examples for greater than, less than, and is equal to and let the children do however many they wish of the 12 cards.

Greater Than Less Than Alligator Layout

Children who are comfortable with the quantities for each numeral could do a layout of the cards for set 1 or set 2 (or even all 24 cards). Be sure to have the correct number of each symbol needed for the layout. If you have exactly the number of greater than cards, less than cards, and equals symbol cards, that will serve as a control of error. You could write the correct symbols on the back of each large card as a more specific control of error, although most children will be able to place the alligator cards correctly and will discover any errors if the wrong card is left at the end.

You could create addition or subtraction equations and use the alligator cards to insert the “greater than” symbol, “less than” symbol, or equals symbol. I had a One Fish, Two Fish Addition Tray with some presentation tips for addition activities as well as Montessori-inspired ideas for presenting activities in general.
A Learning Journey has a Montessori-inspired activity using the alligator manipulative to eat the larger math area.
Here are some YouTube videos with more Greater Than Less Than Alligator activities:
“Number Eating Alligator Song”

“Alligator greater than” (song) by Peter Weatherall
“Mr. Alligator” (chant)
“Teacher Tipster (Greater Than and Less Than)” with an extension activity using a paper plate

Greater Than, Less Than Alligator Math Printables and Activities

Check out my post and video with hands-on, greater than, less than alligator math using part of our subscriber freebie pack and another free printable!

Montessori-Inspired Alligator Pack for DIY Cards and Counters, Number or Letter Matching, Number or Letter Basket, Bead Bar Work, Hands-on Math Operations, Greater Than/Less Than Work, Number or Letter Salt/Sand Writing Tray, Letter Tracing, DIY Movable Alphabet, and Creative Writing (subscriber freebie, so just sign up for my email to get the link and password – or check your inbox for the current password if you’re already a subscriber).